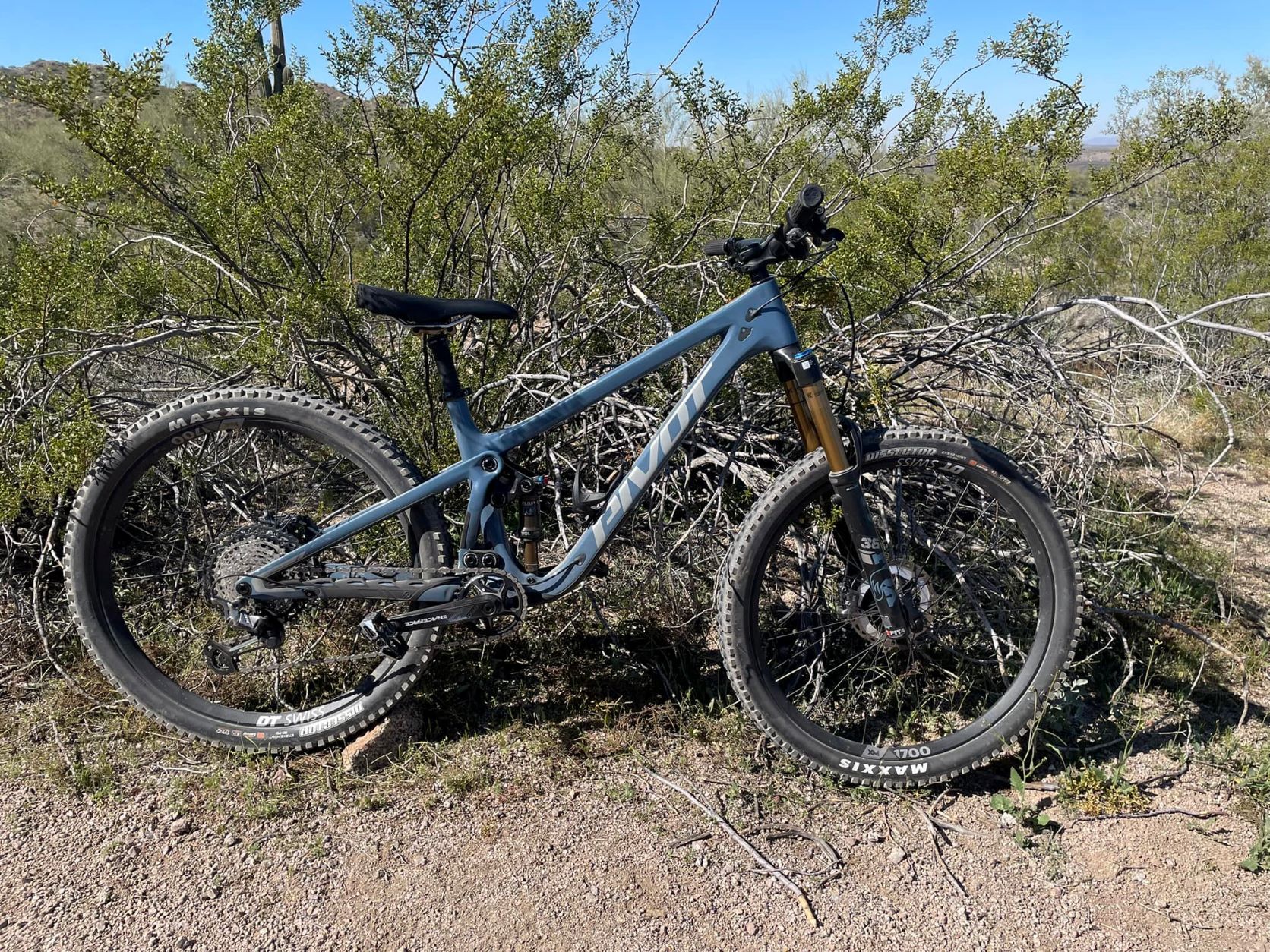 Ok, ok, forgive me for the Super Troopers reference! It just had to be said when the bike's name is Shadowcat.

Yes the new Pivot Cycles Shadowcat is a 27.5” wheel and no, 27.5 is not dead. It’s true that there are fewer 27.5 bikes on the market these days and it’s also true that a 29er is a faster platform overall. That being said, 29er is not faster everywhere. Nor is it as nimble or playful.

One of the perks of owning a bike shop is that my work trips are a little different. They aren’t spent in day long meetings or sitting in conference after conference. While it’s true there are meets, they are often at a trailheads, on bikes! In this case a group of Pivot dealers were invited out to Pivot’s new headquarters in Tempe Arizona, to get a first hand look at and ride the new Pivot Shadowcat.

The Shadowcat is an all new bike that has replaced the beloved Mach 5.5. While the Shadowcat shares the same wheel size and a DW Link rear suspension, that’s where the similarities end. It has a longer reach, a slacker head tube, a steeper seat tube, a lighter frame (I’ll touch base on this later), lower standover and a vertical shock orientation with improved kinematics. What this all translates to, is a very different bike from the Mach 5.5. So naturally, it needed a different name……. Shadowcat!

The Shadowcat is Pivot's light weight mid-travel 27.5" trail bike. It’s sitting on 140mm of rear and 160mm of front travel. That's only 2mm less rear travel than the Switchblade enduro bike. This is a fair amount of travel for a trail bike.

Even more impressive is the weight of the bike. The frame actually weighs less than the Trail 429 frame, which has 20/30mm less travel. It’s actually so light that when comparing the carbon frame (no hardware, just the triangles) to the World Cup XC Mach 4SL frame, it’s only 45 grams heavier!!

In traditional review fashion, I’ll not bore you with build spec. I’ll talk about riding characteristics. I know there are 27.5" naysayers. In point of fact, I may have been guilty of this from time to time. Well... Pivot has changed my mind, and here’s how.

Let’s talk climbing. The Shadowcat has extremely snappy acceleration! The quick acceleration means as you approach an incline you’re able to smash the pedals and maintain a lot of your momentum up a hill, so short punchy climbs are over quickly. On longer sustained climbs the light weight of the bike was noticeable. Coupled with the rear shock tuning, the Shadowcat was efficient, very efficient. It was actually a joy to climb on this bike. On techy climbs, the nimbleness of the bike made it easy to pic lines or pop the front or back end over an obstacle with minimal effort. Hitting a square edge, the slack head angle allowed the front wheel to roll up and over with few hang ups. That’s not to say there wasn’t a few times I noticed the smaller wheel hesitating a bit over a rock, but it was only once or twice I felt it stopped me from cleaning a section. The only issue I really had on technical climbs were pedal strikes. Maybe running a shorter crank arm would be a good idea for people riding mostly technical trails on smoother trails, it was a non-issue. While it may not be as good on techy climbs as the Switchblade, it’s definitely faster. The Shadowcat is truly a fantastic climbing machine! It will hold it’s owe against many bikes with much less travel.

Nimble, quick and sharp. Those are the three words I would use to describe the cornering. It’s super easy to change direction with the Shadowcat, making s-curves a breeze. Leaning the bike takes little effort. The geometry makes the bike intuitive while railing through high speed corners and traversing tight hairpins, meaning you can do them without thinking. This bike is just as comfortable cornering at speed as it is picking its way through rocky bits of trail. It’s quick steering allows the rider to maneuver the bike with little input and inspires confidence in its cornering capability. Tight twisty trail systems are so fun on this bike. Silly tight uphill hairpins are no problem and it’s snappy acceleration sends you out of the corners as fast as a cat with it’s tail on fire.

When the climb is over and the hill points the other way, the Shadowcat pounces into action. I was able to ride this bike on a a wide range of descents. On super chunky, rocky descents the Shadowcat was able to either pick a line and dance through the boulders or just flat out bomb over them. Hucking a drop with short notice came natural. The front of the bike is so light. A simple transfer of body weight and the front would float long enough for the rear tire to clear the ledge. The travel of the Shadowcat allowed for a confident landing with no bottom out. While the suspension tune isn’t like that of an enduro bike, it was plenty capable going fast over rough terrain. I was in fact following a rider that was on a Switchblade and was able to stay on his wheel through the chunky stuff. It may not be a plush, but I had plenty of confidence and didn’t feel bounced around or off line. Where I really had fun on this bike was the on fast flowing downhills. It’s easy to pump and so poppy that pump track style descents were a blast! Jumping the Kitty off of table tops or clearing a few doubles was easy! The bike is so light a playful it’s easy to leave the ground and land back on its feet!

This bike is not a true “bike park” bike. That’s the Mach 6’s territory. This is a trail shredding ripper! A nimble bike that climbs fast, descends well and is just plain FUN! I can honestly say I wasn’t hung up on the wheel size. I stopped thinking about it and smiled. I wasn’t riding a 27.5, I was riding a great bike!

Who is this bike for?

The Shadowcat is for a trail rider that loves to have fun! It’s a bike that is very user friendly, making it great for newer riders looking for a bike that will improve their riding experience. It’s for an experienced rider looking for a trail bike that’s not only fast, but can handle rowdy trails systems, ripping quick flow trails, long days in the saddle and any thing else you can throw at it. A smaller, lightweight rider will benefit from the smaller wheels, while riders up to 6’3” can take advantage of the playfulness of this frisky feline!